I didn't begin this web journal to bewail any calls for ladies in the Catholic Priesthood! Genuine! Yet my fourth post was hastened by knowing about a request calling for it and (having once been an Anglican) my temper were raised. When its all said and done, I exited the Anglican "church" once I saw the magnificence of genuine Catholic Church - I thought I was getting away from any such debates. 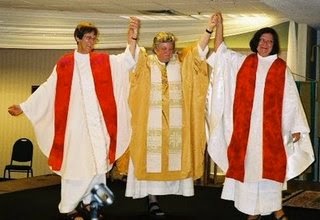 I'm going to lay this to bunk now and trust in the Holy Spirit to guide the Church, as she has accomplished for a long time. To complete, I thought I'd post the content of Hilariter's reaction to this appeal, which appears to elucidate my gut response expertly.

(For Hilariter's late augmentations and elaborations on his contra dicta, please click here.)

As a Catholic cleric appointed 15 years back and now doing further studies in Rome I might want to:

1. Assert my wholehearted backing for the antiquated practice of chastity for the presbyterate in the life of the Church

2. Assert my wholehearted backing for the upkeep of administrative chastity as a vital sign to the universe of the necessity of the Kingdom of God and the call of Jesus, of affection for Him and for His Church over other natural ties

3. Confirm my backing for abstinence as an order as well as a practice grounded in the sample of the Lord Himself, as a lifestyle that communicates the heart of the brotherhood as a complete giving toward oneself for the Church, as Christ provided for Himself absolutely for His one spouse - thus assert that there are great doctrinal and religious explanations behind this practice

4. Insist my wholehearted consent for the Church's conclusive showing concerning the reservation of the ceremony of Holy Orders to men alone

5. Insist my wholehearted consent to the greater part of the Church's teachings, not as "Vatican strategies", yet as the teachings of Jesus Christ who gave His instructing power to the Church's Magisterium

6. Insist my requests to God for the individuals who have left the organization to get hitched, yet my difference that they ought to be permitted again to dynamic religious service still wedded - such a move would be disheartening to the individuals who have attempted to keep up the swears up and down to they made at appointment and is an indication of an absence of appreciation to them

7. Belittle this request as an endeavor to further the society of difference in the Church, a dispute whose genuine nature is a refusal to accept thus is contradicted to the full demonstration of confidence, along these lines will benefit no yet will serve to support division in the Body of Christ

8. Recognize that there is in fact an emergency in the life of the Catholic Church, yet this has been brought about by dispute from the teachings of the Church, an absence of intensive Catholic catechesis, an absence of heavenliness and supplication to God in the life of the Church, an unwillingness to proselytize society with the totality of the Catholic Faith and a developing opposing secularism on the planet which contradict really advertises.

Yours in the Faith

Ladies and the ministry

Emulating my frenzy a few days ago when I saw the ludicrous Patten-appeal, I am delighted to get notification from such a large number of individuals who impart my (and the Pope's) sees on the subject of the appointment of ladies.

Truth be told, I am beginning to see the lighter side, after I discovered the above picture on the Catholic Londoner blog! How splendid!

Truth be told, this is the reason I chose to seek joint citizenship with the UK and the Blogosphere: in the first place, I needed to let off steam without continually getting into a contention! also furthermore, I needed to test whether I am crazy by checking whether any other individual on the planet imparts my insights. Also I'm satisfied to see I am not alone.

In this way, I now feel all warm inside. Like I've consumed a Yorkie bar...


Levavi was born the youngest of three sons to a wealthy Russian Jewish family of good standing in the community and a lineage connected directly to the famous Rabbi "The Vilnius Gaon" in Vilnius, Lithuania in 1912. Levavi's mother fled with him and his brother to Danzig on the eve of the Russian revolution. Orphaned of both parents Levavi's education and were taken care of by his older brother Fima Leibman. He completed his studies in philosophy, mathematics and physics at the universities of Heidelberg and Danzig in 1930. After graduating he emigrated from Germany to Palestine, where in 1932 he received his Master of Arts in Philosophy, at the Hebrew University of Jerusalem.

He worked as a contributing writer for the daily newspaper Davar in Palestine, until he was sent to Germany on a mission on behalf of the HeHalutz Movement (1936–1938). When he came back to Palestine in 1938 he became involved in integrating and coordinating various Zionist and political movements until the formation of the state of Israel.
Posted by Anna Henry at 05:19 0 comments

To Thee I have lifted my soul, my God, in You I trust, I will not be ashamed. Let my enemies mock me, because whoever you expected, do not be disappointed.
Lead me, Lord, Your ways and teach me Your paths know.
Posted by Anna Henry at 04:39 0 comments

I didn't start this blog to bewail any calls for women in the Catholic Priesthood! Honest! But my fourth post was precipitated by hearing of a petition calling for it and (having once been an Anglican) my hackles were raised. After all, I left the Anglican "church" once I saw the beauty of true Catholic Church - I thought I was escaping any such controversies. (More on this subject later...)

I'm going to lay this to bed now and trust in the Holy Spirit to guide the Church, as she has done for many centuries. To finish, I thought I'd post the text of Hilariter's response to this petition, which seems to expound my gut reaction expertly.

(For Hilariter's recent additions and elaborations on his contra dicta, please click here.)

As a Catholic priest ordained 15 years ago and now doing further studies in Rome I would like to:

1. Affirm my wholehearted support for the ancient practice of celibacy for the presbyterate in the life of the Church

2. Affirm my wholehearted support for the maintenance of clerical celibacy as a necessary sign to the world of the priority of the Kingdom of God and the call of Jesus, of love for Him and for His Church over other earthly ties

3. Affirm my support for celibacy not just as a discipline but as a practice grounded in the example of the Lord Himself, as a way of life that expresses the heart of the priesthood as a complete self-giving for the Church, as Christ gave Himself totally for His one bride - and so affirm that there are good doctrinal and theological reasons for this practice

4. Affirm my wholehearted assent for the Church's definitive teaching concerning the reservation of the sacrament of Holy Orders to men alone

5. Affirm my wholehearted assent to all of the Church's teachings, not as "Vatican policies", but as the teachings of Jesus Christ who gave His teaching authority to the Church's Magisterium

6. Affirm my prayers for those who have left the priesthood to get married, but my disagreement that they should be allowed back to active priestly ministry still married - such a move would be discouraging to those who have tried to maintain the promises they made at ordination and is a sign of a lack of respect to them

7. Deprecate this petition as an attempt to further the culture of dissent in the Church, a dissent whose real nature is a refusal to believe and so is opposed to the full act of faith, and so will do no good but will serve to encourage division in the Body of Christ

8. Acknowledge that there is indeed a crisis in the life of the Catholic Church, but this has been caused by dissent from the teachings of the Church, a lack of thorough Catholic catechesis, a lack of holiness and prayer in the life of the Church, an unwillingness to evangelise culture with the fullness of the Catholic Faith and a growing antagonistic secularism in the world which dissent actually promotes.

Yours in the Faith

Women and the priesthood

Following my panic the other day when I saw the preposterous Patten-petition, I am heartened to hear from so many people who share my (and the Pope's) views on the subject of the ordination of women.

In fact, I am starting to see the lighter side, after I found the above picture on the Catholic Londoner blog! How brilliant!

After all, this is why I decided to apply for joint citizenship with the UK and the Blogosphere: first, I wanted to let off steam without always getting into an argument! and secondly, I wanted to test whether I am loony by seeing if anyone else in the world shares my opinions. And I'm pleased to see I am not alone.

So, I now feel all warm inside. Like I've eaten a Yorkie bar...